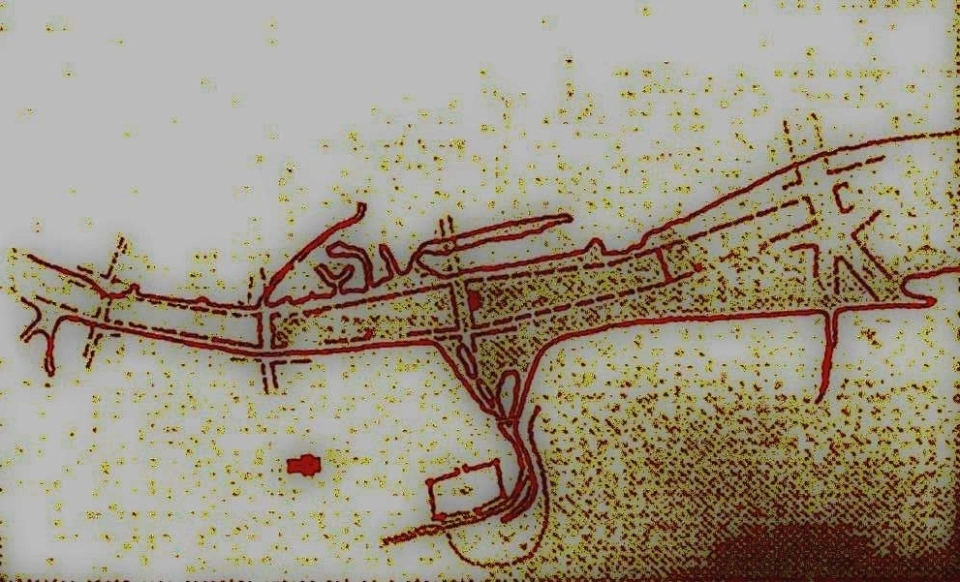 A Deep Mapping of Dublin Port by Silvia Loeffler

Mapping Phase 1: The Medieval City as a Maritime Hub / A Shoreline of Anxiety

Event was held at the following time, date and location:

You can listen to and view the seminar here: LAB Podcast Shoreline of Anxiety

As part of “Port Perspectives”, Transit Gateway is a project that documents the transitional changes of the shape of Dublin Port from its medieval shoreline to its current infrastructure. The changes of the port as a gateway to the city bring to mind the void of communication of the 18th century on the ships before Marconi, the forced emigrations of the 19th century, the modern context of maritime holiday migration that shaped the 20th century, and which now extends itself to the cruise business the 21st century, and how cargo volumes changed over the centuries in terms of goods, locations and quantity.

Transit Gateway is an artistic mapping cartography that will show the changing connections of the city and the port throughout the years, and how the port as a gateway creates a vital connection of the city with the wider world. In collaboration with partners and the local community, the artist Silvia Loeffler has been commissioned by Dublin Port Company to create a social and collaborative artistic mapping project that looks at the port ‘s transitional phases over a time period of 9 months.

A large-scale installation series loosely based on the various maps used by H.A. Gilligan in his “History of the Port of Dublin” will be created, and the works will be displayed in the Terminal 1 Building in Dublin Port. Each month, a new map layer will be added to the installation.

Each month, a specific seminar, which will be held in the LAB on Foley Street, in order ‘to bring the port back into the city’, will accompany the map layer.

“The Medieval City as a Maritime Hub / A Shoreline of Anxiety” was the first seminar in this series. We discussed the cultural meanings of Dublin’s medieval port location and the city’s conjectural waterfront. The earliest jetties to the south of modern Wood Quay and Merchant’s Quay were important features of medieval city life, just like the ‘fysshe slypp’ at Fishamble Street and the socialising places on Winetavern Street.

About 1300, Dublin was a prosperous trading port with a fleet over 200 ships trading goods, and slaves, with English and continental seaports. Psychologically, there must have been a tremendous fear of flooding that was engrained in ‘the psyche of the city’, which would eventually cause the port to move down the river.

We hope that you enjoyed the introduction to Dublin Port in the Medieval World, and how this particular era has been recreated and reenacted for Present Day Dublin.

This seminar was the first in a series of nine, held over the next nine months.

The Transit Gateway seminars are part of a wider public engagement programme for Port Perspectives 2017. They are funded by Dublin Port Company and the LAB Gallery.

Howard Clarke is Professor Emeritus of Medieval Socio-Economic History at University College Dublin. He is the author of the first Dublin fascicle of the Irish Historic Towns Atlas, Dublin, Part I, to 1610 (2002), which includes a revised version of his original composite map of the medieval city (1978). He has written extensively on many aspects of Dublin’s medieval past. In 1988 he was invited by the Dublin port authority to launch Harry Gilligan’s A History of the Port of Dublin. Howard Clarke is also a member and former academic secretary of the Royal Irish Academy.

During the Middle Ages, Dublin went through several phases of topographical development, with the result that port locations and facilities changed radically from time to time. Our first cartographical view, Speed’s map of 1610, represents only the latest of those phases.

The growth and development of Dublin’s medieval port reflects the dynamic between using a natural resource and having to develop that resource to meet growing demands. It is a process that saw the city centre’s fortunes wax and wane throughout the middle ages and was only resolved in the city’s favour when dramatic and large-scale engineering solutions were applied; a process that still defines the city’s relationship with the sea today.

Sheila Dooley is Curator and Education officer of Dublinia Heritage Centre and has been interpreting the material, visual and intangible culture of Medieval Dublin since 2008. She is currently co-authoring a new illustrated publication on Viking Dublin and has just launched the second phase of Dublinia’s and Dublin City Council’s interactive Online Learning education resource. She holds a BA in history and archaeology from UCD, a Masters in early medieval Irish history and sources from NUI Maynooth and a H. Dip in museum studies from the University of Leicester.

Information from later maps has helped us retrieve surprising information about Dublin’s early inhabitants. Where did they dock their ships, what dangers awaited them on the quayside and what did pirates have to do with Dublin’s port? This lecture will explore a visual journey of the medieval port.

Dr. Silvia Loeffler is an artist, researcher and educator in Visual Culture. She is the organiser of the Transit Gateway seminars, funded by Dublin Port Company, and run in close collaboration with the LAB. This seminar series will continue until October 2017 and is part of Silvia’s artistic cartography ‘Transit Gateway: A Deep Mapping of Dublin Port’.
https://silvialoeffler.wordpress.com/